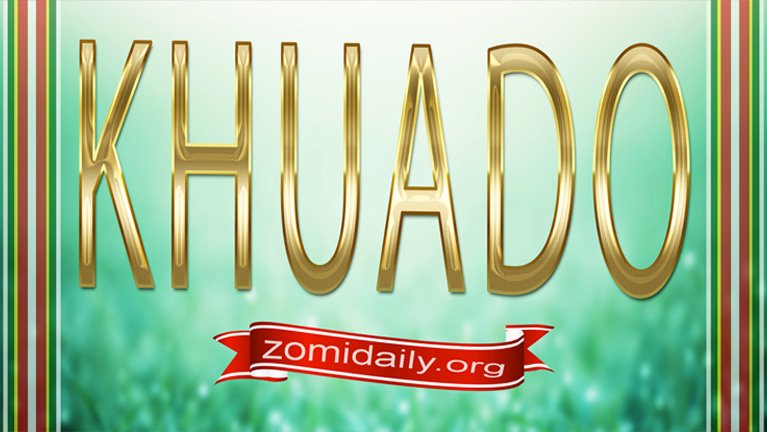 A Brief Story of Khuado Festival

Meaning: The New Year is now coming, the month has been turning away; let the evil spirits be fleeting to their abodes. When they have been leaving us, let our houses be free from threats of all spiteful material objects.

To describe Khuado briefly, it is as a matter of fact, a grand and special period of celebration performed after the harvest by the Zomi since times immemorial. It is held on yearly basis, usually in the month of October. Like Lawm Annek, Khuado is also a Kinsfolk Reunion Festival but it is broader in its scope. In other words, particular clan but like minded persons from different clans from an association called ‘Lawm’ with its headquarters where they perform the festival.

One of the members of the Lawm volunteers to play the host whose house becomes their headquarters. In fact, those who could afford to be generous towards any accessory requirements during the function are the most suitable candidates to be elected to hold the headquarters. In many instance, traditionally, the headman of the village is the host of the Lawm.

Also there used to be another association affiliated to the Lawm sharing the same center which is called ‘Sawm.’ This Sawm is somewhat like a club in which young lads of the same village sleep together at night in dormitory called ‘Hamtung’ which is a raised platform beside the parlour of the house. Those lads bring their own blankets to warm them throughout the night and return home in the morning they attend daily at the ‘Sawm’ under the leadership of an older lad called ‘Sawm-u-pa’ under him there are about thirty or more members called ‘Sawm-nau-pang’ also called ‘Sawm-te.’

The Sawm-te have a splendid unity. They utilized their time for the ‘Sawm-lo-kuan’ it means they work at the field of a member of a ‘Sawm’ to earn a ‘Sawm-vok’ it mean a pig for ‘Sawmte’ it was raised by a member of the ‘Sawm’ for the Khuado Festival. They have different number of ‘Sawm-vok’ according to the required number of pigs for Khuado Celebration.

‘Khuai-la-te’; in the second day of Khuado, the ‘Sawm-te’ took ‘Ngaltun’ (Hornet-nest) for ‘Khuado’ after sundown. They were called ‘Khuai-la-te’ (Those who took hornet-nest). When they well secured the ‘Ngal-tun’ they head homeward. When they reached home all the villagers welcome them with ‘Zo-zu’ (Millet wine). After ‘Khuai-la-te’ were reached, all the members of ‘Sawm-te’ and other villagers took part in dancing with gusto singing. One of the famous song is;

Meaning: We, ‘Sawm-te’ are much more intrepid than the ferocious hornets. So, let the hornets broach many pots of ‘Zu’ and line up along with a goat being tethered with rope for the celebration.

For this purpose a hornet-nest was reserved and the ‘Siampipa’ (the Priest) used a red rooster and a pot of ‘Zu’ for the sacrificial rite to the hornet, which was presumed to be able to foretell the future. The cock was killed and the flesh being cut into pieces and offered to the hornets. Blowing a mouthful of ‘Zu’ by ‘Siampipa’ towards the nest with some incantations followed this. The hornet-nest was burned and removed from the post to be examined by ‘Siampi’ who made a careful observation of clusters of larvae on the flat surface of the hives. In this manner he could predict the probable happening to the village in the offing. Concerning this there was a famous song;

Meaning: You hornet that built your nest in close proximity to my farm. As you know the portent of the future I here with offer you the meat and liquor for telling the truth.

In olden day, this song was in vogue to the Zomi Animism and during the Khuado it become one of the most popular songs being sung by those revelers dancing in circle. Other two songs of the Khuado are;

Meaning: All villagers are in full swing celebrating the Khuado festival, whereas, I am mourning for the dead in the sepulcher.

Meaning: While paying a visit to my neighbor next to my farm some sparrows were fetching out the ears of the millet. Despite my bawling to the birds the biggest of the millet ears was flown away.

The difference between Lawm-an-nek and Khuado is that in the former, there is no dancing except when ‘Sawng’ is celebrated during the festival. But, in the Khuado, dancing, is the hallmark of the festivity.