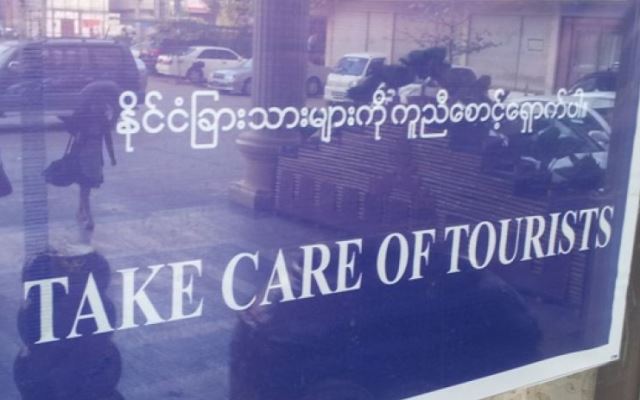 The State Immigration Department said that any information about tourists visiting Chin State must be reported to them.
Local hosts including hotels and families are responsible for informing the authority of details regarding their guests, according to the announcement.

The head of the State Immigration Department was quoted as saying by the Chinland Post: “If they stay at a hotel, the hotel must report their details including whereabouts and what they do to us.”

He also said that many Chins were coming back as foreign citizens to their native places, adding: ” If they stay at a family’s house, the family is responsible.”

According to official statistics from the State Immigration Department, a total of 2,013 tourists visited Chin State between April 2011 and March 2014.

Salai Cin, a Chin Canadian citizen, told the Chinland Guardian that he didn’t feel comfortable during his short stay as the authority kept disturbing him all the time by asking what he did.

A hotel owner in Hakha said on condition of anonymity that they got a lot of work to do if they had a foreign guest.

“We are happy to receive foreigners staying at our hotel. But the police as well as the immigration gave us too much trouble. They keep ringing or coming to get information about them,” added the Chin owner.

Salai Thang, a Thantlang reporter, said that two immigration officers had stopped him and his foreign friend while walking around the town centre of Thangtlang.

“They said they needed a photocopy of my friend’s passport. I told them to get it from the guest house. They said they were just carrying out instructions from above.”

The police superintendent said that he wanted to make sure tourists visiting Chin places were safe and that his team wanted to help them during their trip.

He said his friend was disappointed and didn’t feel comfortable staying at the town.

“My friend told me, ‘I feel my visit has caused trouble to you too much. I haven’t come across this kind of situation during my previous visits to Mandalay, Nay Pyi Taw and Rangoon. What happens here?'” he said.

The Immigration Department warned that action could be taken in according with the immigration law against those failing to report to the authority.

Meanwhile, President Thein Sein said in his address during the opening of the ASEAN Tourism Forum 2015: “Tourism is a driving engine for economic growth.”

He continued: “If we can promote more peace, stability, and relaxation for travel restrictions for both international and regional tourists, the arrivals in 2015 can increase up to 5 million.”

Burma aims to receive 4.5 million visitors in 2015, an attempt to increase the number of 3.08 million last year. Source: CG