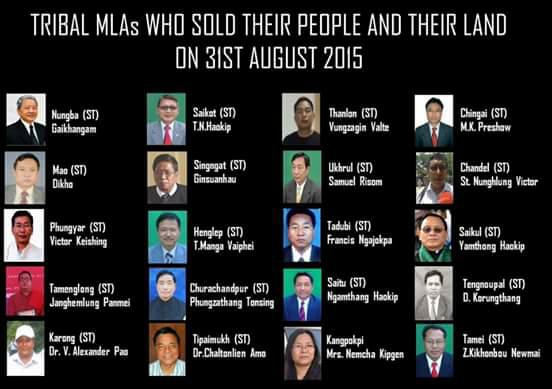 The Manipur Tribals Forum, Delhi, understanding that the passing of the three contentious bill sin the Manipur Assembly on the 31st of August 2015 represents a direct attempt to undermine the rights of tribals and uproot them from their lands, and regard the brutality and atrocities of the Manipur state forces as a reflection of the continual cycle of systematic injustice and discrimination that the Manipur government perpetuates against the tribal population.

Condemning the brutal repression of the Manipur state forces to a mass protest by firing on them with live bullets as an unpardonable human rights violation that caused the loss of innocent lives and serious injury to many others, and also supporting the public disapproval and resentment of the silence of their own MLAs in the assembly, we the Manipur Tribals Forum, Delhi, hereby unanimously demand the following resolutions:

(i) The immediate resignation of the 16 remaining tribal MLAs listed below within the next 7 days:

(iii) To bring to visible justice the police officers who are responsible for the death of the following innocent civilians:

We are deeply concerned with the turn of events in the hill districts of Manipur. It is our appeal and desire that a lasting solution be amicably worked out by all stakeholders in order to avoid any such incidents in the future. The unity and solidarity expressed by all tribal groups is a reflection of the urgency to solve the recurring attempts to subvert tribal rights in Manipur.