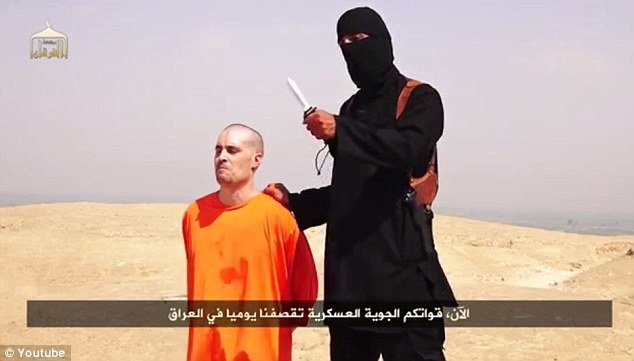 ‘I GUESS I WISH I WASN’T AMERICAN’: PHOTOJOURNALIST JAMES WRIGHT FOLEY’S FINAL WORDS TO CAMERA BEFORE HIS DEATH

‘I call on my friends family and loved ones to rise up against my real killers, the US government. For what will happen to me is only a result of their complacency and criminality.

‘My message to my beloved parents: save me some dignity and don’t accept any (unclear, possibly says media) compensation for my death, from the same people who effectively hit the last nail in my coffin with a recent aerial campaign in Iraq.

‘I call on my brother John, who is/was (this part is also unclear) member of the US Air Force, think about what you are doing, think about lives you destroy including those of your own family.

‘I call on you John, think about who made the decision to bomb Iraq recently and kill those people, whoever they may have been.
‘Think John, who did they really kill? Did they think about me, you our family when they made that decision?

‘I died that day John, when your colleagues dropped that bomb on those people – they signed my death certificate.

‘I wish I had more time, I wish I could have the hope of freedom and see my family once again, but that ship has sailed. I guess all in all, I wish I wasn’t American.’