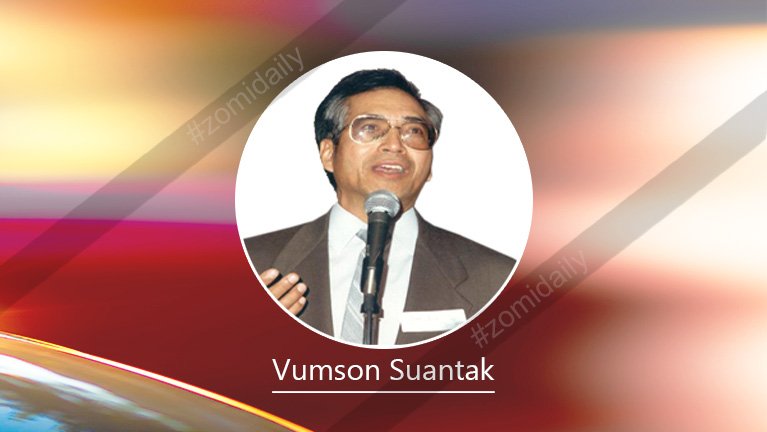 Zo people believe they settled in the Chindwin Valley in early times. They know the Chindwin River by different names— the Lusei as Run. meaning river, and the Paihte as Tuikang, meaning white water. Pu K. Zawla in his “Mizo Pi Pu to Ieh an Thlahte Chanchin” suggested 996 A.D. as the year in which Zo people arrived in the Chindwin Valley. and he oelieves that they lived there two or three centuries.

The rise of the Tang dynasty (618-906 A.D.) brought contact between early Zo people in the Chindwin and the Tang Chinese. The Tang, as widely traveled traders. recorded the existence of three kingdoms in Burma—the Pyus, the Pegus (Mon). and the Sak. The Sak kingdom may have been the Zo of upper Burma.

They migrated from the north as the last of the Tibeto-Burmans) Because of a misunderstanding between the emperor and the second Nan-chao chief. Ko-lo-feng, a great battle was fought at Hsiakuan and 6,000 of the Tangs’ troops were killed. Thus the Nan-chao established themselves as a stable kingdom. During this period the Shan attempted to push eastward into China as well as southwest.

In 750 A.D. Ko-lo-feng opened trade routes to India and to the kingdom of the Pyu in central Burma. He established permanent garrisons at staging posts, and these garrisons were in later years to dominate northern Burma and conquer the Zo people in the Chindwin Valley. In 700 A.D. the Nan-chao plundered the Pyu capital and carried off thousands of captives to Kunming, which ended the Pyu kingdom.50

Tang Chinese travelers learned of an eighth century kingdom and various tribes existing west of the Nan-chao kingdom. The capital of the kingdom, “the wooden stockade”. was situated at the confluence of the Irrawaddy and Chindwin Rivers. At that time the Zo people must have settled north and west of the capital, as most of the locations connected with the Zo people were found in the north of the Chindwin and Irrawaddy confluence.

The northern most part of the Zo settlement was at Homalin.Fan-ch’o, a diplomat of the Tang. described the Chindwin River and the people living in the Chindwin Valley. The Chinese called the Chindwin River “Mino”; hence the people living in the Chindwin Valley were called Mino people. Fan-ch’o wrote in “The Manshu: Book of the Southern Barbarians”, “It takes its source in the Hsiao-Po’lo men *Little Brahman Kingdom’ of the northwest. It flows south past the Yuyeh-chu river valley. Then to ;he southeast it reaches the wooden stockade which is on a sand bank 100 Ii from north to south and 60 li from cast to west.

They call their princes and chiefs Zo. The Mino have long white faces. They are by nature polite and respectful. Whenever they address anyone, they came forward making a bow at each step. The kingdom has no cities with inner or outer walls. In the middle of the hall of.the Mino King’s palace there are great pillars cut and carved in patterns and adorned with gold and silver… They are 60 day stages southwest of Yungchang city of Man.- (The Chinese called the Nan-chaos “Man”.)

“In the ninth year of Taho (835 A.D.) the Man destroyed their (Zo) kingdom and tooted their gold and silver. They captured two or three thousand of their clansmen and banished them to wash the gold of the Li shui (Irrawaddy)”

Remains of Zo settlements are still found today in the Chindwin Valley. Two miles from Sibani village, not far from Monywa, is a Zo ritual ground. The memorial stone was, in earlier days, about thirteen feet (4.3 m) high, but is now decayed from exposure. The Burmese called it Chin paya or Chin God. The place was called “Ashground” because of the high ash content of the soil.

In 1971 Khantinzamvungh found beads front necklaces, remnants of copper belts, and pieces of water pipes, used for smoking, in the earth. The Burmese told him that in 1968 Major Ko Ko took three Jeep loads of material from the ground and drove away. In Sathung, a village near Mintaipen, there are remnants of Zo memorial stones which have inscribed the date the Zo people were attacked by Mingyi Kyaw Saw. Near Sagaing bridge there is a village called Chin Ywa or Chin Village.

When the Burmese descended to the plains of central Burma, during the ninth century, Zo people were already in the Chindwin Valley. According to Luce the Burmans fought against the other occupants of the area. such as the Thet, Mon, and Pyu, but they did not fight the Zo.

The reason seems very simple. Since the Burmese settled in the east of the Irrawaddy, and the Zo were dominantly between the two rivers, there was no conflict of interest concerning their territory between the two tribes. Only after their kingdom was destroyed the Zo crossed the Chindwin and settled in the Kale-KabawMyittha-Yaw-Valleys and Pandaung Hill. Asho tradition says that they lived in the Pandaung Hills and crossed the Irrawaddy and lived on the cast bank of the Irrawaddy during the Burmese Pagan dynasty.

The Shans established a state at Hkamti Long, previously held by a Tibetan prince in about 1000 A.D. It started as a military outpost of the Nan-chaos during the three-side hostilities involving Chinese and Tibetans. After establishing themselves the Shan began settling in the Hukawng, Mogaung, Kabaw. Kale, and to a lesser extent in the Yaw valleys. The Shans must have intermixed with the Zo people, as many Zo. in particular the Lusei and the Pawi (Zahau), legends tell us about their times with the Shans.

For example “Shan khaw fiartui the vat in dang, Ngaknun hnamchem ang an chawi” Not only do songs describe a river, which speculation holds to be the Chindwin, but the songs narrate life in a Shan village. The Paite, or other Zo clans, seem to have no such traditions. The Paite call the Shans “the children of Khamang” which perhaps means that the Paite regarded the Shans as Khmer. They call the Chinese “Sen” which must have been derived from Shan. The Paite were less intimate with the Shans during that time because they occupied the areas around Kan a little farther south from the Shan.

During this period the Zo occupied the countries west of the Chindwin and Irrawaddy Rivers—stretching from Khampat/ Homalin area in the north to the Yaw country/Pandaung Hills in the south. The Shans concentrated themselves in the northern part of this area— mainly north of Kale. Few Shans were in the Yaw area. Zo were the main occupant of the area south and west of Kale, the Myittha and Yaw valleys. Some Zo were already in the southern Zo— northern Arakan areas.

In 1253 the Mongol king Kublai Khan struck south from Linpan mountains of Kansu. through sonic 700 miles of no-man’s land, by-passing Tu-fan (Tibet), and attacking Ta-li the Nan-chao capital. The Nan-chao kingdom of Ta-li was destroyed in 1279. After this destruction the surviving Shan rulers migrated to the present north of Burma, Thailand and surrounding areas.

The Mongols then invaded Burma and captured Conca (near Bhamo) on the ninth of December, 1283. The Mongols advanced as far as Myingyan and then retreated. The Shans of Hkamti Long and Mogaung took the opportunity to fill the vacuum thus created and in April. 1301 invaded and overran north Burma, east and west of the Irrawaddy. In 1364 they sacked the twin Burmese capitals of Sagg ing and Pinya.

After destruction of the Burmese kingdom petty Shan kingdoms were formed in different parts of Burma, including Kale. Like their sister states of Mohnyin and Mogaung, they be came indepen-dent.

The Mongol invasion and the Shan activities drove the Burmans to migrate to the west of the Irrawaddy starting during the thirteenth century. The Burmans settled down in the Yaw valley. At a certain time the Burman seemed to recognize the Zo people with their own name and called the area the Zo country. Yaw was derived from Zo or a very similar word. The river in the Zo country was named the Zo stream or Yaw chaung.

The Burmans brought their culture, religion and wet cultivation, which they copied from the Pyus. Zo and Burman lived side by side over a century. Both of these tribes had at one time in the past the same ancestor. They shared the Tibeto— Burman language and therefore the Zo plain dwellers of the Yaw valley adopted easily the Burman language and Burmese way of life including the religion. These Burmanized Zo people are still in the Yaw country today. They call themselves the Yaw people and speak Burmese with a distinctive dialect.

Most of the Zo people however did not easily change their way of life. Even in the Chindwin valley they used slash and burn method of shifting cultivation, and practiced their custom of animal sacrifices. They preferred hill areas for their settlement and many of them occupied the Pandaung Hills as documented by Asho history.

Because new immigrants were brought by waves of Burmese invasions of the kingdom of Manipur and Assam, the Burmans quickly spread to the Kale-Kabaw-Myittha valleys. By the four-teenth century the Burmese established themselves tightly in the area that their chronicles mentioned Kale as early as 1370. The Burmese hold on the Shan was so strong that by the fouteenth century the names of the Sawbwas bore Burmese names, including Kyitaungnyo, the Sawbwa of Kale.