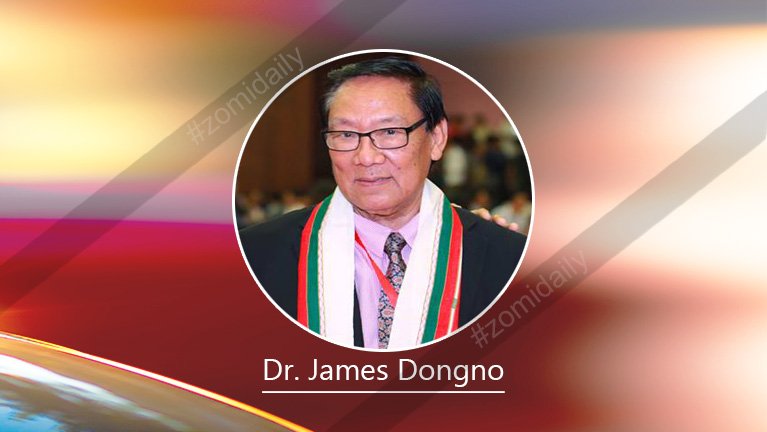 The origin of Zo was lost in the mists of time and though little is known of the time and place of origin, the evidence is that long before medieval time Zomi was used in Tibet. And even much earlier in ancient China there were traces suggesting the origins of Zo. In the twilight world many scrambled for information on how deeply Zo rooted. In a zealous determination many helplessly advanced theories; some coming up with the words Zozu, Zothau, Zopuan, etc., to demonstrate the originality of Zo but to no avail while others ending up on the person of a man called, Pu Zo to be the progenitor of Zomi.

On the other hand, some people do think and even write that Zomi never existed before Zomi Baptist Convention was founded in 1953. Others went even further to take it out on Rev. ST Hau Go as the ‘inventor’ of the word, Zomi. Nothing could be farther from the truth. He was not the inventor of ‘Zomi’ but he did propound that Zomi was the most appropriate name for the newly-formed Christian organisation to include all groups of the so-called Chins. To them, saying “Zomi originated in China and had been used by their ancestors more than 20 centuries ago in Tibet” would seem to be amiss or rather far-fetched as only a wishful thinking.

To say “there was no Zomi before ZBC was founded”, only because one does not know there was, would be comparable with their ancestors saying“ Tuikaangpi khangsiah ah bangmah om nawn lo”. “There was nothing down beyond Tuikaangpi, the ‘big white water’ – that was the confluence of Irrawaddy and Chindwin rivers. In those days they believed ‘Tuikaangpi’ was the edge or limit of the world. In the context of Zomi, they think ZBC(1953) was the ‘Tuikangpi’, before which Zomi never had existed. But exist Zomi did far before ZBC and continuously does to this day. Not knowing the existence or even the absence of record on something does not warrant to jump to the conclusion that the thing never had existed. We shall see there is more to the existence of Zomi than meets the eye.

There are clues that shed new light on the existence of Zo, the ‘name of a people’ and Mi, the ‘word used for people’ in ancient Tibet in antiquity bringing the existence of Zomi into light out from the shadowy twilight world. Even in ancient China during the second half of the third millennium BC and (c.24th BC) were emperors by the names Yao which can be read as Zo. E K Robin. Chin History, Culture and Identity.p 112. So too, Chou, a dynasty . can be transliterated as Zo. ibid.

Zo has been their self-given national identity used from distant past notably, in the Northern Chin State in Tedim and Tonzang as Zomi, in Falam as Laizo, Zahau-Zhou/Zo, in Haka and Thantlang as Zo miphun as well as its cognates in the South in Mindat and Kanpelet as Cho(Zo) in Paletwa as Khumi(Zomi) and in the plains as Asho(aZo). Rethinking Our Identity (ROI) JSZDong ZOLUS No.20, 2016-2017 p186-202.

We will briefly but concisely trace Zo and the people, Zomi retrospectively, from its adoption into ZBC (AD1953), all the way back through the era of Pu Pau Cin Hau (and his Scripts) (1859-1902) and colonial as well as post-colonial days on to pre-Pagan Period (AD 862) in central Burma, in ancient China and finally tracking it down to their forefathers’ origin in Tibet to establish that Zomi has been their identity unbroken from pre-medieval time to this very day – over a span of 2,000 years.

a. Zomi at ZBC inauguration, AD 1953: Under the leadership of Rev ST Hau Go with the revered duo from Haka, Rev. Sang Ling and Rev. Sang Fen who testified Zo as our original name, and a multitude of Christians, 3,000-plus strong, assembled at Saikah village during 5-7 March 1953, unanimously and wholeheartedly adopted Zomi en masse to be the name for the Convention, hence the historical birth of Zomi Baptist Convention, ZBC. This could not have happened if Zomi was invented at Saikah.

Baptist denomination, then commanding the vast majority of Christians in Chin State, ZBC unified them as a closely-knit community under its wing. Therefore, inflicting depredation to ZBC impinged irreparable damage upon their hard-found unity. Such being the religious, social and national status of Zomi, it is next to impossible this binding force would ever have happened if it (Zomi) was ‘invented’ only in 1953 as alleged by some.

Paucinhau Script was the only writing system the so-called Chins ever had in living memory and was in popular use among the people of the northern parts of Chin Hills in the Tedim, Tonzang subdivisions and in some parts of Falam at the turn of AD 1900. His religion, Laipian, along with the popularity of his Script, spread beyond Tedim as far to the South as Haka area and westward to Lushai Hills, now Mizoram and Manipur State in India.

During WW1, AD 1917-18 communication between the France corps, Piancit Paite, and their families in Chin Hills was only by means of correspondence in Paucinhau Scripts. Such a well-established writing system of their own, however, was ‘ grudgingly’ superseded by the English alphabet introduced by one of the earliest American Baptist missionaries to Tedim, Dr. J H Cope two decades later. But thanks to the faithful followers of Laipian, who successfully revive and maintain the century-old scripts, already on the verge of total extinction, back to its former glory.

a. Zo in Pre- Pagan Period (and thereafter in chronological order)

1091 years before ZBC was founded in 1953 AD, and 182 years before the first Burmese King Anawrahta reigned (1044-77) in pre-Pagan Period, Jo/Zo kingdom had been recorded by Fan Cho in AD 862. The respected Chinese diplomat of Tang Dynasty wrote, “ A petty kingdom in Chindwin Valley whose princes and chiefs were called Jo (Zo)”. ‘The Manchu Book of the Southern Barbarians’.

b. 445 years before ZBC, ( Zo after Pagan Period), Sir Henry Yule recorded in AD 1508, that there was Yo/Zo country in central Burma thus: “ Yo (Zo) country and the location of which was west of the mouth of Chindwin, the interior of Doab, between the Irrawaddy and Chindwin…” and

c. 170 years before ZBC, Fr. V. Sangermano, an Italian Catholic priest wrote about Zo Nation, in AD 1783 : “To the east of Chien (Chin) mountains, between 20°30′ and 21°30′ north latitude, is a petty nation called Jo, Shu (Zo)”, Description of The Burmese Empire, page 35. Printed at the Government Press Rangoon, MCMXXIV.

The logical conclusion is that since there were Jo kingdom, Yo nation and Jo/Shu country the people were obliged to think of themselves as Jo/Yo/Zo people. Without Zo people no Zo kingdom, Zo country and Zo nation could ever have been built. And Zo people is simply Zomi.

The fact that they are Zo people had been documented by colonial and post-colonial writers namely Sir J G Scott, Dr G A Grierson, H N Tuck and Bertram S Carey, Capt.Rundall, Prof F K Lehman, etc., etc., among many others. JSZD -ROI.

Yao : One possible root of Zo can be found in Chinese chronicles. An emperor named ‘Yao’ was recorded to have reigned during the second half of the third millennium, BC. Also, another legendary emperor appeared with the name, Ti Yao in 24th BC who was praised by Confucius as the epitome of kindness. Zo people often took the names after their leaders’ as their clan-names or national name, take for instance, the cases of Hatzaw or Kamhau respectively. In that pattern their forefathers would have been called Yao as a people. As “Y and Z and also ‘ao’ and ‘o’ are interchangeable respectively, Yao is equivalent to Zo”. Wade System.

Chou : Chou is a tribe or dynasty in ancient China. According to the method of spelling by Wade system, the consonants, ‘ch’ sounds like ‘j’ and the vowels ‘ou’ is equivalent to ‘o’. And ‘j’, ‘y’ and ‘z’ are used interchangeably by scholars. Hence ‘Chou’ will be read as‘Jo’ or ‘Zo’. Therefore some historians used to write Chou as Zhou when dealing with Zou – Zo.

E K Robin explicitly affirmed, “It may, therefore, be concluded that Chou, the name of the Dynasty in ancient China is the root of the much sought word, Zo”. He went on to say. “Thus, whatever may be the case, the fact is that the appellation Zo is originated from China. E K Robin, Chin History, Culture and Identity p112

It will be even more exhilarating to revisit from here into the dim and distant past to our forefathers’ Tibetan origin and experience the discovery that there, too, were Zomi then. It is of vital importance, however, to primarily establish that Zo and Mi were used by their ancestors in Tibet on a par in meaning with what the words mean to them today. By piecing together relevant information garnered from the invaluable works of earlier scholars and investigators we can now successfully construct Zomi from Zo and Mi in pre-medieval days. It is amazing that few, if any, self-given national names of Tibeto-Burman groups from antiquity are as well preserved in pristine conditions.

a/ Jo/Yo(Zo) belongs to the Tibeto Burman stock, an indication that Zo was originated from Tibet.

b/ Pu Khup Za Go, a noted Zomi scholar, Manipur State, India, wrote, “ Jo-thang / Zo-thang, in the Amdo region is where the Zomis are said to have originated as their Tibetan origin”. Zo Chronicles p192.

d/ One source describes the prime origin of Zo that one of the earliest peoples of Tibet called Singmi/Shingmi worshipped an almighty, all powerful god as the creator with sovereignty over all things, called ‘Jo’(Zo). Warren W. Smith, A publication by Myanmar Socialist Program Party. Courtesy : Pu Kham Go Pau, Tulsa USA.

e/ Dalai Lama V translated Jo of Jo-thang(Zo-thang) as ‘Lord’ and thang as ‘The Perfect One’. By this translation he threw his full support on Zo as ‘Lord or god’ facilitating the construction of how Shingmi/Singmi, receiving the name Jo(Zo) from the god they worshipped, became Jo (Zo) people, ie., Jomi, Zomi.

This is reminiscent of how the name Israel came into being from the word, El of Elohim, the name for (their) God given in the tanakh. (Gen. 1:1) In the like manner, it could be that by the passing of time their forefathers referred themselves, as well as others calling them, as ‘worshippers of Jo god’ and later on as ‘people of Jo god’ which eventually evolved to be their race as Jo/Zo. This explains how their forefathers in Tibet called themselves, and were called by others, as Jo/Zo people.

The aforementioned statements are evidence enough to conclude that Jo/Zo was an established name to identify their forefathers in Tibet twenty centuries ago.

We have discussed their ancestors used Zo to identify themselves while in Tibet. Now a discovery by the Linguistic Survey of India 1898, confirmed that their forefathers in Tibet, too, used the word ‘Mi’ for people, exactly the same way Zomis do today. The Survey’s finding reads “Those who used ‘Mi’ or ‘Mui’ for people or man/men are regarded as originating from Tibet”. Their Tibetan cousins, progeny of their common ancestors, the Shingmi/Singmi, share the word mi for people, man, men, like many other basic words, even to this day. Again we can safely say that their ancestors, too, used Mi for people twenty centuries ago in Tibet.

Now, based on all evidence it should suffice to conclude that since their forefathers in Tibet used Jo(Zo) as their national name and Mi for people, man or men, to call them Jomi/Zomi is as literal, logical and legal as it could be. Defying the test of time and all the odds way back from pre-medieval time, Zomi reverberates through from Tibet, China, then central Burma (Myanmar) and Chin Hills (Chin State), echoing an unbroken and symbolic tradition of their original and age-old identity. Dr. J. Suan Za Dong